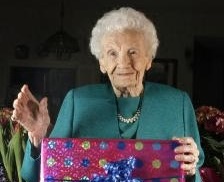 Something or someone keeps bumping off the Oldest Person in America.

The death of 113  year old Elsie Thompson, of Clearwater, Florida, marks the second time this year that the person certified as the “Oldest Person in America” has died while in office. This seems very suspicious. Yet the liberal media is silent. So it is up to me to ask:

What was the 2nd Oldest Person in America doing at the time of Elsie’s death?

I tried to raise the alarm about this back in January with the mysterious death of Besse Cooper (116). Back then I suspected Elsie, who had the most to gain as the runner up. But now I suspect 3rd runner up Jeralean Talley, 113 of Michigan – who now leapfrogs to the title.