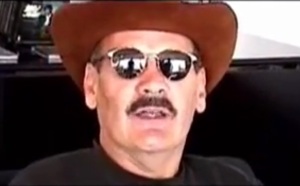 Richard was a recently retired college professor when I first met him at one of his infamous after-hours parties. I was writing a nightlife column at the time for the Chicago Free Press, so our paths were destined to cross. He was holding court around his sprawling couch, a cigarette dangling in his hand, ashes going everywhere but in the amply full ashtray in front of him. I still remember his booming laugh as he concluded an elaborate “dumb blond joke”, a funny joke that was all the funnier for his dramatic re-telling.

Richard had been a tenured Professor at the University of Illinois, and a well-known expert in the psychology of education. A brilliant man from a humble and chaotic blue collar childhood, he studied hard and received degrees from the University of Chicago and Roosevelt University. A lover of both psycho and drama, (his favorite movie being “Who’s Afraid of Virginia Woolf”)  Richard relished getting friends or strangers on his proverbial couch to spill their guts or to take one of those standard personality tests, which he’d administer like he was reading you your fortune.

Richard loved telling the story about one of these late night psychotherapy “patients”; a young man who confessed to Richard that what he wanted most in the world was to become a fashion model. Richard thought the guy was over estimating his attractiveness. Not one to hold back on dashing dreams, Richard explained to him that professional models all tended to have certain ratios and symmetries to their facial features; and then proceeded to whip out a tape measure to assess the degree of the bad news, which he delivered with a sympathetic shake of his head, “Pity.”

He was a great listener and a mentor to many, but, alas, a terrible role model. He drank Skyy vodka from morning to, well until the next morning, while also using stimulants to mask his intoxication. He had a good excuse for his drinking and drug abuse though. For over twenty years he had walked around with a grapefruit sized hole in his leg, the former home of a cancerous tumor – whose removal left a giant radiated, un-healing wound, the sight of which would make a battlefield doctor vomit and go AWOL. The radiation rendered the wound incapable of healing over and un-bandaged you could see bone and a good place to smuggle things through an airport. So, he had an excellent excuse to drink – the alcohol and pills kept him mobile, until the pain became unbearable and he had to lay down.

Richard had a terrific sense of humor and a hearty laugh to go with it. He loved a good joke or even better, a good insult. Because of his leg, he preferred hosting in his large Edgewater condo overlooking the lake. When the bars let out, there was always a place to hang. I saw many a sunrise from his balcony. I also got to learn about condo boards from his various run-ins with them over his late night extravaganzas. He was actually forced to sell one of his old places after too many complaints. That condo board had a dossier on him thicker than Bin Ladin’s – which he loved to bring out and read a loud from.

His funniest condo board run-in happened one morning around sunrise when some of his departing guests discovered there was a swimming pool on the roof of his high rise building. Richard sent me to shoo them out, but the water did look refreshing and I confess I may have been negligent in performing my duties.

Unfortunately, sunrise is also a great time for old people to swim laps.

The resulting condo board complaint indicated there was “noxious sexual activity” going on in the pool, which was untrue; as I argued to the board, it was merely two people innocently rubbing against each other rhythmically in order to keep warm in the chilly pool. I think we got the fine down to $600 that time.

He died a few years back. The cancer came roaring back in his leg and he refused his doctor’s advice to amputate. I begged him too lose the damn leg – I even offered to lop it off myself. But he let the cancer take him. I hope when I go, my friends will think as fondly of me as they do of Richard.

Now, may I present a never before seen video of Richard as the Marlboro Man  –  in a home video filmed by his Polish ex-boyfriend who I’ll call Jack. (As Jack is a doctor now living in a conservative country, he wants to remain anonymous). It took years for me to track him down for this video. A copy of it disappeared from Richard’s safe after he passed, along with the notorious “Sketch Book” a diary in which visitors would write interesting things or tell jokes or draw cartoons.