Eileen Brennan, the Oscar nominated actress/comedian, always makes me think about my Aunt Karen, a former dancer on the old Mitch Miller TV series who got her start in theater touring with Eileen Brennan in summer stock.

While Eileen Brennan went on to win Emmys and an Oscar nomination for “Private Benjamin”, Karen retired from the business to marry legendary jazz drummer Frank Garisto, who was then the drummer on the “The Tonight Show” – as well as the bongo player heard on the original Star Trek TV series theme song!

Karen wasn’t really my aunt – but she was my very own Auntie Mame growing up in rural, redneck, homophobic Ohio Her years-ago stint on a famous TV show gave her an unbelievable glamour factor to me as a child. She was also a great beauty.

When I met Karen, she had divorced her drummer husband and moved back to her parents home in Akron, Ohio with two boys in tow. She found a job and became a co-worker of my also divorced Mom in the Photocopy Department of the United Rubber Workers Union. The two divorceés quickly became close friends. And I instantly developed a crush on Karen from the moment I met her as an impressionable 5th grader.

Karen once took me to audition for a part in “The King and I” at our local equity theater company called the Carousel Dinner Theater. For kicks, Karen decided to audition too. She knew she couldn’t accept a part due to her work schedule. (The concept of flex schedules hadn’t caught up to the Rubber Workers that would have allowed Karen time off for Wednesday matinees.)

It was magnificent seeing her glide across the stage like the pro she was – still. I couldn’t believe it. She owned that stage and the producers were visibly impressed. Later, it was hard not to be jealous when Karen got offered a part and not me!

You would think after years of living a storied life among New York’s show biz elite, the transition to the photocopy room at the United Rubber Workers would be a bummer, but she never let on around me. She was the most upbeat person I’ve ever met.

I loved hearing Karen’s show biz stories. She had worked with a lot of famous people . She was also good buddies with Liza Minnelli’s conductor, Bill LaVorgna, and that got me backstage for a one-on-one meeting with Miss. Minnelli.

Actually, I got her reunited with her old pal. I was 20 and had just moved to Chicago when I read that Liza Minnelli was playing the Chicago Theater. When I told Karen I bought tickets for Liza, she suggested I send a note bakstage to Bill dropping her name. Which I eagerly did.

At intermission, I checked with the stage doorman, who informed me Mr. LaVorgna had not responded yet, and suggested I come back after the show. When I returned, there was a huge crowd gathering at the stage door waiting for Liza to exit. I made my way thru the throng of people back to the doorman, who sadly informed me there was still no response.

Dejected and feeling sad for Karen as well, I made my way back thru the crowd to go home, when suddenly two security guys came running after me calling my name! They escorted me back thru the crowd and thru the stage door to meet Bill LaVorgna, who was thrilled to hear from his old friend he hadn’t spoken to in 10 years. I was then taken upstairs to the green room to meet the legendary Liza Minnelli! She couldn’t have been nicer, though I was a nervous wreck.

Afterward, I made my way back out the stage door where a large crowd was waiting for Liza. When the door opened, I heard a “There she is!” Followed by a collective groan of disappointment when they saw it was only me.

Karen would talk wistfully about her early days when she performed with Eileen Brennan as a dancer in a touring theater company. It sounded like the most fun a person could have. I also remember Karen being really upset when her old buddy, at the height of her “Private Benjamin” success, was hit by a car and critically injured while crossing a busy Los Angeles street. We both sent get-well wishes to her and Eileen responded back to me with a sweet thank-you note quoting the “Irish Blessing” with a message “love to Karen”.

It sucks that awesome people have to leave us – Karen died a few years back from cancer. I was so angry at the universe for taking her. The world needed more people like her, not fewer. But I’d like to think that Karen – and now Eileen – are dancing again in the heavenly equivalent of summer stock. 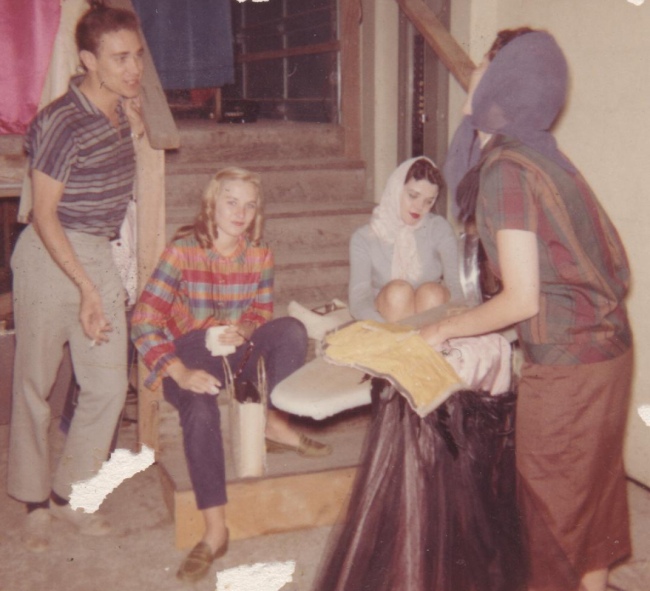 Eileen Brennan 2nd from right and Karen on the right

Karen was also a gorgeous model!

Karen Conner (her inscription: “An Aardvark in the making!” was an inside joke) 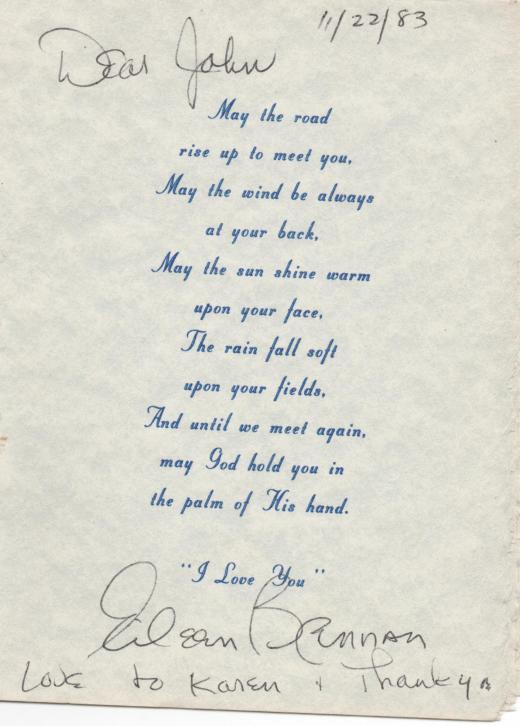